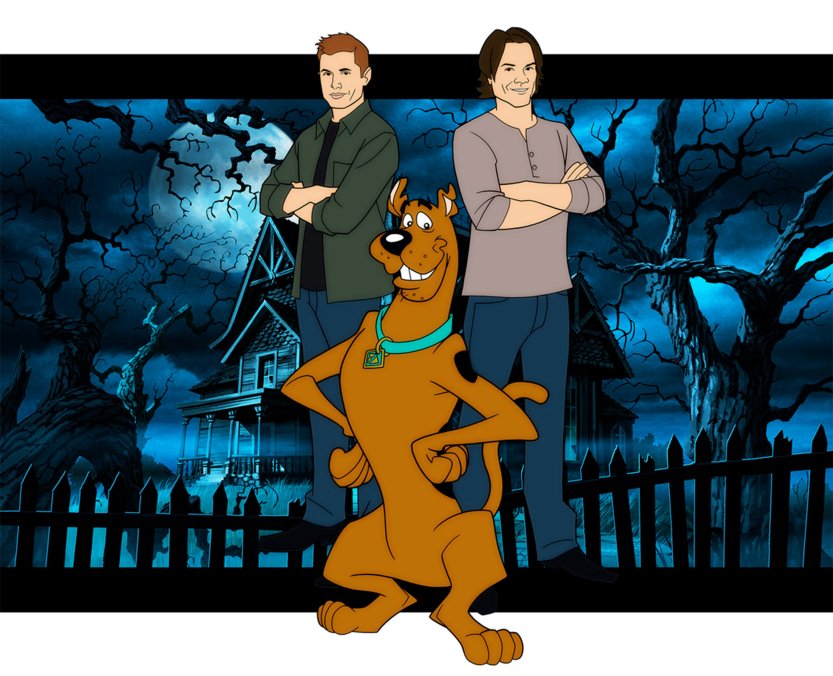 (Image courtesy of Entertainment Weekly and The CW)

Tonight on the CW at 8 pm/ 7pm central is the crossover episode I’ve been waiting for since I first there was the possibility it could happen. ‘Scoobynatural’! Yep, that’s right folks. The venerated cartoon classic from the 70’s will be coupled together with the series ‘Supernatural’ in some freakish impossible way that can only happen to the Winchester brothers. Dean (Jenssen Ackles @JensenAckles), Sam (Jared Padalecki @jarpad) and Castiel (Misha Collins @mishacollins) all star in the show along with Scooby, Shaggy, Freddy, Daphne, and Velma. I’m as giddy and excited as a little school girl waiting for her parents to bring home the puppy she saw at the pet store and wanted it so bad. Yeah, like that.

Briefly, because that’s all we have, after Dean purchases a tv for his “Man Cave” at the Men of Letters bunker he, Sam and Castiel are transported into the animated world of ‘Scooby-Doo’. The Winchesters figure that this is a scheme by the Trickster to torment them (if you don’t follow the show just trust me when I say that, yeah, this something he would do) and believe that the only way out is to finish the storyline of the cartoon episode. Dean, the ‘Scooby-Doo’ aficionado takes lead thinking he recognizes the mystery to be solved. So, the three of them meet up with the Scooby Gang (Dean writing off the bucket list by finally meeting his lifelong dream girl, Daphne) and they help along trying to solve the mystery. Except, as if things can’t get any weirder, this is not that Dean, or anyone, remembers and now they are as clueless as the local law enforcer.

The others starring in the show as voices are Grey (DeLisle) Griffin as Daphne, Kate Micucci as Velma, Frank Welker as Scooby and Freddy, and (drum roll please) Mathew Lillard doing what he has been done very well for years, Shaggy. It is written by ‘Supernatural’ seasoned writers Eric Kripke (creator/producer of the show), James Krieg and Jeremy Adams. It is directed by another ‘Supernatural’ veteran, writer, producer, director Robert Singer.

As of this posting, the show premieres in a little less than two hours. I’m already silencing my phone, getting dinner ready, and making sure, for the fifth time today, that the DVR is set to record so I can see it again. And again, and again. I also warned my friends, children, and ex-wife I’m running in ‘silent mode’ so “no one visits, calls, messaging unless someone is bleeding profusely and at the ER and even then, be near death”.  A little over the top? Well, at least I’m not locking my wife out -she’s a fan.